The most innovative pothole solution ever 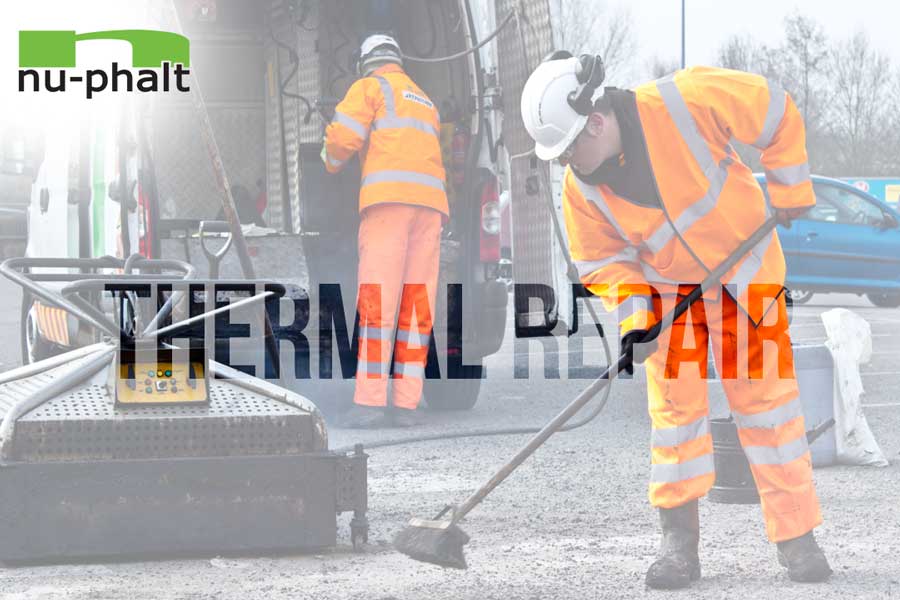 As Nu-phalt™  passed their ten-year anniversary, they can look back on rapid growth and success thanks to their unique patented system and pro-active approach to repairing potholes and other surface defects.

The nu-phalt™ Thermal Road Repair System was developed by their team as an alternative to traditional road and pothole repair methods, which are costly, noisy, and create waste and dust. The thermal heater produces a permanent, heat-sealed, seamless repair to re-establish the original integrity of the road, and only a minimum of new material is needed.

In order to reduce carbon emissions, minimise disruption to the public and traffic, and facilitate a faster repair, they have created an entire solution in one vehicle. This includes custom-built hot boxes for the new material as well the thermal heater, emulsion, roller, and everything needed for road and pothole repair.

Check out this video to see exactly how it works

Trench upgrade to one of the UK’s largest country parks 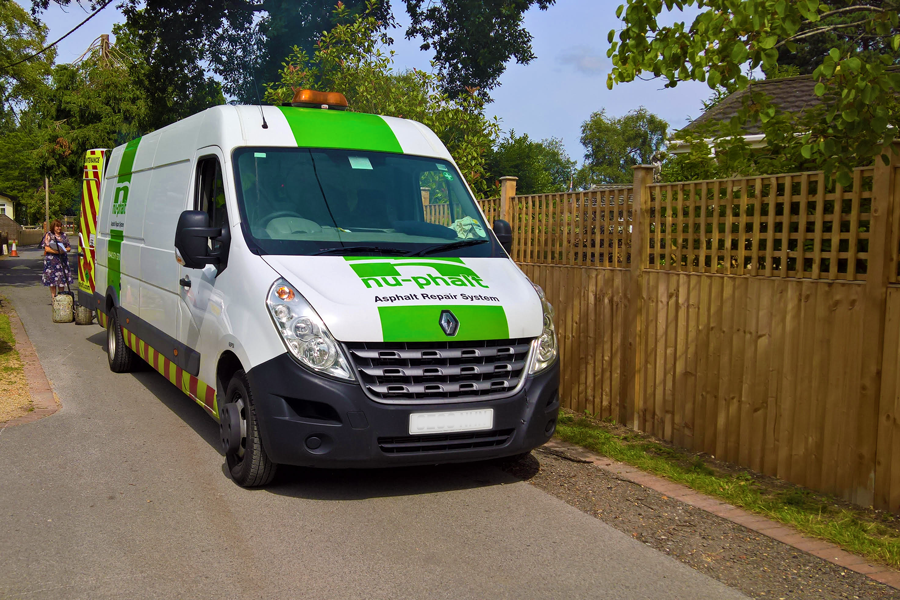 Nu-phalt™ have delivered a scheme of  trenches for a new electrical infrastructure at Warfield Park.

Warfield Park is a Park Home estate, (more commonly known as mobile homes) with some 509 Homes, making it one of the largest in the country, set in 90 acres of woodland with a further 80 acres of woodland and farmland assets. It is nearly unique in the industry, for having generously apportioned gardens and a twisting road network, more akin to a rural village, than the common image of a mobile home site.

Nestled between Ascot and Bracknell, Warfield Park has existed in its current form since 1947 when planning was first granted for 22 caravans. Before that it was a private estate, with a Georgian Manor house set in some 300 acres including ornamental gardens, farmland and woodland. Since then, it’s gone from strength to strength. With 479 Residential Park Homes on the main Warfield Park site and a further 30 on its secondary site of Harvest Lea let under 6 month Assured Shorthold Tenancy. In the last few years it has been decided, by the Company’s Board that the existing overhead electric network has become increasingly difficult to maintain due to its age and an inability to find companies, large or small willing or able to maintain it in the long term. Combined with Warfield’s woodland setting and increasingly unpredictable severe weather it is also becoming increasingly exposed to potential storm damage. It has therefore been decided to implement a 10 year improvement programme to instate a new underground electric network and remove the existing overheads, starting with key strategic sections that are most likely to suffer storm damage.

In order to lay the new electrical infrastructure this has required a substantial amount of trenching works to be carried out. Whilst every effort was made to avoid excavating in the road system, this was ultimately an inevitability. It was therefore a key requirement to reinstate the roadway to a high standard, once the cables had been laid and trenches backfilled. Having used Nu-Phalt™ for some pothole repairs previously they were the obvious choice.

Facts on the project The Benefits of using Nu-phalt™

One of the most important objectives was to minimise disruption to Warfield Park residents during normal working hours. As the majority of Warfield’s residents are 50 plus with the majority being of retirement age this means many are around for most of the day. With the system Nu-phalt™ has developed, the footprint of the work area is as small as it can be, Nu-phalt™ were able to keep road closures to an absolute minimum.

Because of the method of laying/reinstating the asphalt, and heating not just the new but the old as well, it creates a very neat smooth finish. It matches in with the original road surface and is almost indistinguishable after a few months.

The seamless finish has also solved the problems which we’ve had in the past, from conventional asphalt repairs, with water seeping into the joints and freezing during the winter, causing more damage to the road and needing to be redone in the spring. Another key benefit was Nu-phalt’s™ willingness to continue works over the weekend which has allowed us to finish the remedial works inside of 14 days from start date as opposed to a likely 3 weeks’ worth of disruption.

“It’s every bit what was promised and then some. A superbly simple and effective solution.”

“An incredibly knowledgeable and conscientious team, one of the easiest companies to work with. Kept informed at all times by staff working from Head Office and the operatives carrying out the work on the Park.”

For more information on Nu-phalts™ services please contact us on Enquiries@nuphalt.com

We have lift off – Our New Websites 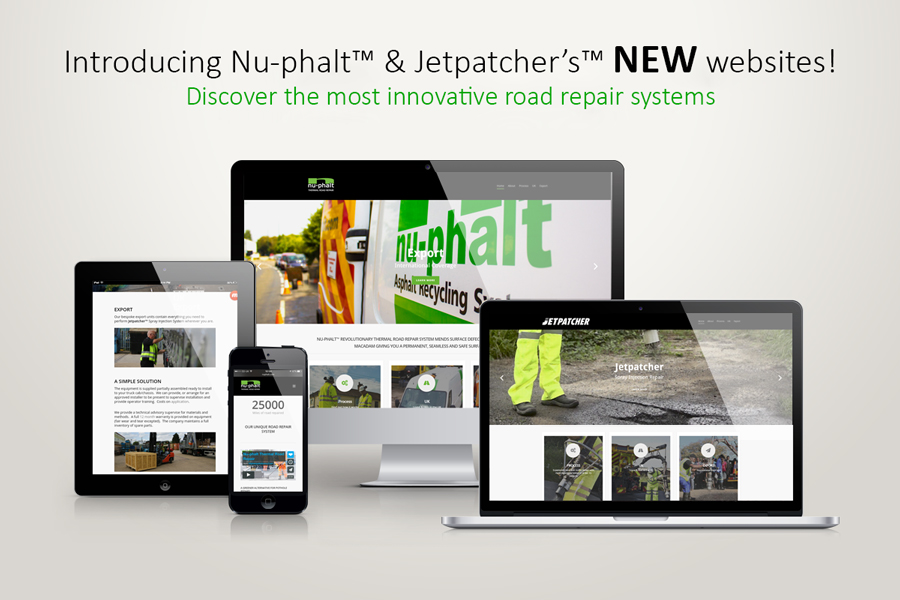 Nu-phalt™ Thermal Repair and Jetpatcher™ Spray Injection are delighted to officially announce the launch of our newly designed websites!

Our goals were to provide visitors with easier access to information, easier ways to collaborate and enable us to showcase our upcoming news and projects. Take a look around and let us know what you think by contacting us here.

At Nu-phalt™, we think of ourselves as ‘the one stop solution for road repair” and work tirelessly to develop our systems to be innovative and efficient.

Our gleaming new website will help tell showcase our services in an engaging way by guiding visitors through the different areas of our businesses.

In addition, we want our new website to encourage local authorities, main contractors, heads of highways and other asset managers to look seriously at our solutions for road repair whether it be an urban or rural application.

Following our redesign, we are able to engage with our ever-growing audience in new and better ways – including through greater social media integration and mobile compatibility.

This will create a higher quality user experience, regardless of what device you are using to access the website.

Another significant boost for us is that our new upgrades have provided a consistent layout, structure and navigation flow.

All this is ultimately part of the Nu-phalt™ vision ‘to be the leaders in Road Repair and Civil engineering and this is now reflected by our new website.

We hope you enjoy the new website and all the exciting new features it offers.

UK Manufacturer nu-phalt­™ are once again growing and developing the business within the export sector.

They have created a new innovative system that’s being delivered to the Hungarian market this summer. Not only is the system supplied by the UK manufacturer, the client also receives refresher training on products and maintenance.

The Hungarian market for the nu-phalt­™ system has been strong for the business, and they have worked as a distributor over there for more than 5 years. The new system has given nu-phalt­™ a 3 year exclusivity agreement with EnviRoad-eu.

The client in Hungary supplies vehicles to local authorities as well as some private contractors. They are currently working on a large campaign to restore defects in over 200km of road.

nu-phalt­™  began working with Enviroad-eu back in 2009, with the delivery of their first heater, built into a custom vehicle, during the use of the system enquiries grew and by 2010 they had developed a relationship with OTA Kft in a sole partnership to repair roads.

By 2011 they were working with the government and were implementing the system in Budapest. They now work with over ten local governments and enterprise contractors for road network repairs. Amongst them is Gödöllő and Ócsa city, VIIth local government of Budapest, along with COLAS Hungary Zrt, P&G, Auchan and Tesco.

The nu-phalt­™  system is perfect for the Hungarian market as it operates all year round in adverse weather conditions. Therefore, is adaptable to any situation and is highly effective in Europe.

nu-phalt­™  have also supplied a ‘stand-alone’ system for the national highways company for trials and evaluation. If the outcome of this is successful then nu-phalt­™  will be increasing the export business by 30% on last year.

So far Hungary has purchased over ten systems for their market with some districts operating more than one system.

“As we grow the business we see that it’s imperative that we don’t just focus on the UK market. Our systems are perfect for any country and we will continue to develop the innovation and technology to supply this demand”

“During the years a correct and helpful almost friendly cooperation was established with Steve Smith and with nu-phalt­™ professionals that outperforms a simple business relation. We keep working on this cooperation to make it more effective and successful for both parties.